How To Stop Your Pets From Scratching Your Fly Screen Doors

How To Stop Your Pets From Scratching Your Flyscreen Doors 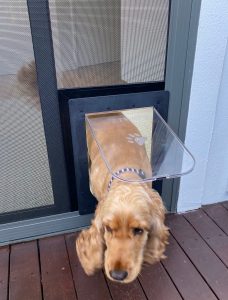 A cute kitten or puppy will scratch at a flyscreen door with soulful eyes, waiting to be let in. Sure, it can be adorable, but eventually all those claw marks build up and can damage and even tear your flyscreen. Whether they’re itching to be let out or begging to come back in again (sometimes within the same minute!), letting your pet maul your door is eventually going to leave some damage. So how can you stop your pets from scratching your fly screen doors?

But it can be hard to stop ingrained behaviours, especially when those behaviours are associated with a reward – “I scratch the door, the human hears me, I get let in!”

Get some scratch deterrent

One simple solution to keep pets away from doors is to spray them with scratch deterrent or another similar odour blocker (the door, not the pet). These are nifty little containers full of a product that when scratched or otherwise disturbed, releases an unpleasant odour.

It’s effective because your cat or dog won’t be dissuaded from going near the door at all, but will learn to associate scratching with being a negative thing.

Unfortunately some sprays may damage the screen which would void your warranty and this is not always the most cost effective or long-term solution, depending on the tenacity of your pet. Some get the hint pretty quickly, but others will just keep on scratching, or go immediately back to their habits once they realise you’re not spraying any more.

For a less chemical-based solution, and one you won’t have to go out and get specialty pet products for, try sticking some double-sided tape up on the door to cover where your pet usually scratches.

Both cats and dogs hate sticky paws. it’s not easy to get off, it feels unpleasant, and it’s just as annoying in fur as it is getting stuck in your hair.

Tape is a similar to scratch deterrent in that it relies on your pet coming to the conclusion scratching is a bad idea before the tape comes away. If they don’t, the tape is only another semi-permanent solution. Tape may also leave a sticky residue on your screens which can be difficult to clean off.

Some cats don’t scratch out of a need to get in or out, but instead are scratching bugs off of the screen (and unfortunately also poking holes in it).

Putting up a bug zapper doesn’t sound like it’d be a good solution to fix a pet clawing at a screen door, but if bugs aren’t landing on it then there may be a lot less impetus to claw. If you think your cat is hunting flies, try it out!

Get a Pet Door (Doggy Door) in the Flyscreen Door

As we said before, the vast majority of scratching is a result of rewarding negative behaviour. You don’t have to punish a pet for scratching to be let in (though a quick spray of a water mister doesn’t go astray from time to time), but start rewarding them when they stop behaving badly, or if they start to not do it at all.

But this solution isn’t a quick-fix, and you run the risk of sustaining more damage to your screen while it’s in effect. The plan of action goes like this:

Double up on training

Most dogs (and some cats) are taught some variation of “down” or “off” to stop them from bouncing up on people or to get them off couches. If your pet knows what these terms mean, use them to enforce the door as an object not to be jumped at, much like a human.

Get a pet resistant screen

SP Screens can provide you with flyscreens in a special Pet Proof mesh.  These screens are pet resistant due to the mesh being a bit tougher than your standard flyscreen and specifically designed to resist scratching and claw-pokes. Another option is to install a Security Screen door which offers the strongest mesh available which can’t be clawed through.  Although Security Screen doors are not scratch proof, they have the option of being installed with a pet door.  With these two screen options, if you’re pet is acting mischievous you don’t have to worry about the condition or longevity of your screen door.

Installing a pet-resistant screen means you won’t have to make your house stink or look like an arts and crafts show in order to dissuade your pet from scratching.

Training a pet to not scratch can take months, or years, depending on the breed. Some dogs catch on in weeks, but cats and stubborn dogs like Jack Russell Terriers can be sticklers for old habits, or be too excited to think straight about the rules. With SP Screens, you won’t have to worry about them shredding your doors while you teach them better manners.